Hubby got his second SA back today and the results were much better. On the first SA, motility was around 7% and now it was 50%. Still below normal, but much better. I'm hoping that this means that IUI might be an option for us since an IUI with only 7% motility really doesn't have great chances. I don't have the numbers in front of me right now, but normal and abnormal morphology was also much better, although still less than normal.

We are excited about the improved numbers. The lab did say the sample arrived too late to them and the temp was too low. The dr's office offered to do another SA for free since they delivered it too late. But I'm thinking (actually this is what the lab said) that would only have a negative effect on the results, so if anything this is an underestimate.

Maybe the first test was just bad or maybe the vitamins and all the changes hubby made has worked. Either way, we are happy.
Posted by Missy at 8:55 PM 5 comments:

Anyone know a good urologist?

Ugh. I'm convinced there are no good urologists in our area. My RE who first did hubby's SA and then referred him to a urologist once we got the poor results back. This guy barely gave hubby the time of day, hardly did any exam and then just said to take a multivitamin and come back in a few months. Hubby was completely deflated about being dismissed.

So he found his own urologist who was supposed to specialize in male infertility. After his appointment today, hubby is doubting whether this guy specializes in anything. This dr did seem to do a thorough examination and said he does not have a varicocele (which I'm not sure is a good thing or bad thing, if he had one at least it would be fixable).

But when they started talking about next steps and solutions, hubby asked about IUI. This guy's response? What's IUI?

Umm, how can someone who says they specialize in infertility not know what IUI means. I mean, upon clarification it appeared he just didn't know the acronym, but still. It's not like IUI is some arcane term or pure blogging leet-speak.

So who knows what our next steps will be. This dr did do another SA and we should get the results back in a few days. I go back to the RE in a few weeks. The dr. also mentioned putting hubby on clomid. I guess I did it for a few months so maybe he can try it now?! Anyone have any experience with putting men on clomid?
Posted by Missy at 9:06 PM 2 comments:

OK, the things on my list will probably take me much longer than the spring (in fact, some of them can't be done until the fall), my motivation is in the spirit of clearing things out for spring. Now that my hubby has started his graduate degree, he is occupied most evenings and weekends. So I need to keep myself occupied without him. I figure I can keep myself distracted from TTC-related things, stay out of hubby's way, and beautify our home by tackling all the projects that have been bouncing around my head.

I made a head start this weekend. It may not seem like much, but this is my new gate lock! I'm so proud. You can see where the old gate lock used to be. That one was the kind with the bar that slides back and forth and one day slid so much it fell out and we couldn't find it! Very puzzling since you would think it just be on the ground below the lock. Anyway, we found a better gate latch and now we can keep the gate closed when we want to and even open it from the front! And I only broke one drill bit and stripped one screw. 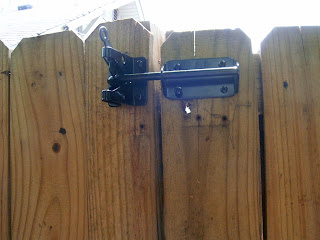 Now, here's the rest of my very long (too long) list of projects:

I will update this list as I tackle more projects and hopefully can these things done!
Posted by Missy at 1:15 PM 2 comments:

I've been a bad blogger. Sorry about that. But actually I enjoyed this mini-blogging vacation. Not quite a vacation since I was at a conference for work all of last week, but the conference kept me so busy I couldn't think about babies, fertility, pregnancy, etc. And for a brief week I felt like a normal person again. I didn't wake up every morning and take my temperature. I even (gasp!) drank wine at some receptions. I felt so reckless. Nothing like a little wine and a scintillating research discussion to make one go crazy.

Of course coming back to the real world brought it all back. So much for having a 2009 baby. That won't be happening now.
Posted by Missy at 8:36 PM 5 comments:

I know at this stage I probably shouldn't have much hope each cycle. It gets disappointing to have AF come again and again. Getting my hopes up only makes it worse.

But still, here I am, calculating my expected due date if we're successful this cycle. Truth be told, I don't particularly want a Christmas baby. Of course I would be thrilled if it were to happen now, even though we had just gone through the stress of telling our families. I can't help but get a little excited once I saw the exact date from the due date predictor. December 28. That was the day of my parents got married. And then the day my half-sister got married. Well, so maybe that's not such a great omen, considering my parents divorced and I'm not even sure my sister knew it was the day her dad married his ex-wife. Is this a sign? If so, of what? Now the waiting game begins. I hate this part.
Posted by Missy at 8:27 AM 4 comments:

Thanks to Ella, for giving me this Lemonade Award! I'm honored. Do you think I should put this on my vita?

Here's the information on the award:
1. Put the Lemonade Award logo on your blog or post
2. Nominate blogs that show great attitude or gratitude
3. Link to your nominees within your post
4. Let the nominees know that they have received this award by commenting on their blog
5. Share the love and link to the person from whom you received your award

Yay! I lost 4 pounds in the last 15 days. I feel like my work and attention to diet has been paying off. Now I just have to keep it up.

Of course, reading this did not help. Now that's an IF diet I can get used to.
Posted by Missy at 9:16 PM 3 comments: