Moving to a new blog

Dear friends,
I'm sure my absence has made you wonder about the future of this blog. The short story is that I decided to move to a new space. More details can be found on my new blog: Mama Asterisk.

I hope you join me over there!
Posted by Missy at 8:37 PM No comments:

Do you ever think about how you look to the general public? Now, I'm not talking about whether your hair is perfect or your rear looks big in those jeans. But when strangers see you out and about, what do you make them think about? There is, of course, way more to all of us than what is apparent on the outside--and many times our real personality may not even conform to whatever stereotype our appearance evokes. But I do find myself wondering what stories pop into strangers' heads when they see me and Seven around town.

My curiosity about how strangers view us could just be my own neuroses. Seven certainty does seem to mind how others sees us-he looks at me and sees only his mommy. All those people stopping us to comment on how cute he is or ask how old he is are only suspicious characters trying to distract me from his full attention. Yet often I wonder they added attention we get from the random passerby has to do how we came to each other and how our skin colors mark us as different and - to a stranger at least - not belonging to each other. I used to always assume that the average stranger sees us together and thinks about adoption, wondering if he was born in the US or another country. Perhaps that's because its a question I ask when I see a parent-child pair of different races. Just today there was a White mama dropping off an Asian daughter at Seven's daycare and my thoughts turned to adoption even though I had no clue about their real situation.

Until recently when I was talking with a colleague who worked in another state. We work for different organizations that collaborate closely, holding monthly in person meetings. At one of the first meetings, I showed off lots of pictures of Seven to everyone there. Of course being the usual proud mama who wants to brag on her kids. At the most recent meeting she mentioned she's read a lot on racial identity development. It was more of passing comment made in a group setting but it sparked my interest. I am curious to watch how Seven develops his racial identity. How he resolves the fact that he is African American and Hispanic with White parents is a whole other topic for an entire blog--yet alone just this one post. But I did read something that says by their second birthdays, toddlers in transracial families will have picked up on the difference in color and--if not quite its importance, the sense that skin color difference is not quite the same as having a different hair color. So later on when we were on our way to dinner, I asked her to recommend books I could read on racial identity development. As we got to talking, I told her about our situation. She was surprised and said that when she saw the pictures of my son, she assumed my husband was African American and that he was our biological son. It never occurred to her to think about adoption.

This was quite a new thought to me--the idea that we could "pass" as biologically related to each other when my husband is not with us. Don't get me wrong, I am not ashamed of the adoption and don't want Seven to feel that we need to "pass". But sometimes you just don't want to stick out or worry that if he has a meltdown someone will take it as commentary on all adoptive families and not what it is--a toddler being a toddler.

And then a story like this comes out where a father is questioned by the police because he has a different skin color than his daughters and "they just don't fit together." And it's back to square one all over again. It is so disheartening to read that we haven't come as far as I hoped in recognizing the diversity in all our families.
Posted by Missy at 8:51 PM 3 comments:

Now that Seven is over a year old, I understand why so many siblings are two or so years apart. I get a lot of reminders these days that Seven is no longer a baby! It seems the frequency with which I hear that phrase "he's growing up" is increasing. First it was his doctor telling us to transition him off the bottle. Then it was his daycare teacher, who thinks he needs to move up to the toddler classroom. Even Seven is telling us how it is, with his nap schedule changing to have one mid-day nap rather than a morning and afternoon nap. Not to mention all the new words he is learning and how much we can tell he understands.

Now don't get me wrong, Seven is still super cuddly and loves to snuggle like a baby. But he is ready to move on to the next stage of toddlerhood. And I still want my baby!
Posted by Missy at 8:36 PM No comments:

We are finally getting around to doing our taxes this year. It was very frustrating that we only received our final two documents about some investments this week since they were do, oh, two months ago! But even more frustrating since I've been very motivated to get our taxes done this year so we can get the adoption tax credit.  But they are finally done and hopefully it won't take too long to get the refund. I know the adoption credit will slow it down, but we can always hope, right?

Back when I had blogged about our total costs related to trying to get pregnant, we were moving towards adoption and I had planned to also blog about our final costs related to the adoption. But now that everything is done, I am hesitant to do so. Logically, paying a doctor huge fees to get pregnant is just as much "buying a baby" as paying a lawyer or social worker to process an adoption. Yet emotionally it feels different and that makes me want to keep it private. I could blame it on Seven and say we want to keep it private for his sake. But that just begs the question. Why should it be more private to know that your parents paid a doctor something like $20,000 to get pregnant than to pay other types of professionals to bring you home? And we didn't even have much in terms of birthmother expenses or vague agency match fees, which are the grayest areas of all to me in terms of the costs related to adoption. The overwhelming majority of it was the homestudy and post placement, court costs, attorney fees, birthmother counseling, and travel to North Carolina. We didn't spend in areas where we didn't feel comfortable spending and the amount was within the target we started with. Still, putting all the details out there doesn't seem quite right.
Posted by Missy at 2:33 PM 2 comments:

Imagine me saying that in my best Grover voice (which, admittedly, is not very good). Seven has a toy Grover remote that says that when you turn it on. I have a friend who is a big Grover fan so I always think it is funny.

I know I have been neglecting this space. With the increase in spam comments I've been getting, I figure it is either time to return or close down. But I have gotten a lot out of this space and the community I found here that I don't want to give it up. So let's take one more shot.

Work continues to be very busy. My travel has slowed down to just two trips a month, but there are a lot of deadlines. I find myself working most nights after Seven goes to sleep, which doesn't give me a very good life balance. We did have an absolutely fabulous weekend these past few days. We had beautiful weather and I enjoyed it with my beautiful family outside. The weekend started with a leisurely breakfast outside in our backyard, followed by a picnic at the botanical gardens, and dinner on the patio of a new restaurant. We visited E's parents on Sunday, and then broke in our new grill in our backyard. Spring has been slow to come here, so it was especially nice to enjoy the outdoors.

Seven is 13 months old now and, despite his small size, seems so grown up. He is very mobile and babbling so much. He even speaks several words. And he is amazing with his sign language. He mostly knows signs related to food, but it is so cute.
Posted by Missy at 8:41 PM 1 comment:

Last week, Seven turned one! What a fabulous first year he had. I'm sorry I haven't been blogging, but I've been busy at work and don't feel much up to writing once I get home!

We had a truly amazing party for him in our backyard today. Lovely company, lovely food, and lovely weather. Unfortunately, my camera was not so lovely and my SD card died in the middle of it. I did get some good pictures of his cake, but my pinterest-worthy cookies are lost. Ugh. Anyway, here is one of the pictures I could get of my precious one year old. He didn't really want to touch the cupcake, but we all had fun. 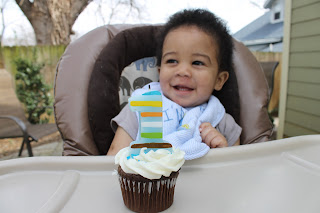 We had a big few days over here. We woke up to snow on Friday and Seven had his first experience with snow! It wasn't much, didn't even cover the grass all the way. But I had fun taking him outside. He was a little apprehensive about it and probably way too cold.

Friday evening was a big milestone - he took his first step! We were so excited. Last weekend I saw him reach the end of a piece of furniture and it seemed he was really thinking about branching out away from the furniture. But he didn't. So in the past week, I've been standing him in the middle of the room and trying to get him to step towards me. Well Friday evening E set him down by the couch but facing out toward me. I encouraged him to come to me and he took two steps by himself! We were so excited that I think we scared him a little. But he did it again a few minutes later.

By Saturday evening he was taking up to 6 steps by himself. He still prefers to crawl since he is much faster that way, but he keeps trying. Of course with his increased mobility also comes more exploration in the kitchen. We've left a few cabinets open for him and he gets into them all the time now! He is so adorable. We did manage to get one good video of his walking and when he was napping, I just watched it over and over again.
Posted by Missy at 8:33 PM 1 comment: